Lawyers for the People: Jason Gibson

At 31, Jason Gibson has accomplished more than most lawyers would be proud to accomplish in a career. Since graduating from University of Houston Law Center in 1998, Gibson has accumulated more than $80 million in settlements and verdicts and has never lost at trial. Gibson is one of the youngest lawyers ever to serve on the Board of Directors for both the Houston Trial Lawyers Association and the Texas Trial Lawyers Association. 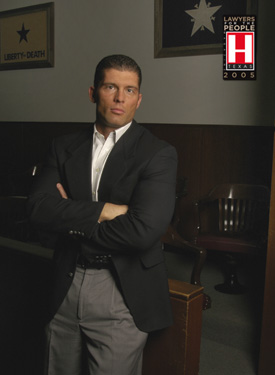 Gibson's firm focuses its practice on cases involving catastrophic personal injuries, wrongful deaths, toxic torts, in addition to pharmaceutical and commercial business-type litigation. "We're aggressive, we're efficient and we win. That's the bottom line," he says, referring to his firm's philosophy on the handling of its cases.

Gibson is motivated by personal experiences with his own family. His grandfather recently passed away from an acute form of leukemia which Gibson believes was associated with occupational exposure to benzene. "As a union leader, my grandfather spent his entire life helping the working men and women of Texas. As a trial lawyer, I intend to follow in his footsteps and carry on that tradition."

Whether the case is against a high-profile company such as Firestone or a high-profile individual such as Garth Brooks, Gibson is prepared for the challenge. "I like being the underdog and I like the challenge of a good fight," he says. So what's next for this up-and-coming trial lawyer? Gibson's firm is currently pursuing claims against Merck & Co. on behalf of heart attack and stroke victims who used the drug Vioxx®.

Achievements
713-650-1010 info@jag-lawfirm.com
The Gibson Law Firm
FREE CASE EVALUATION
There was an error submitting the form, please try again.
Attorneys, clients and potential clients can ask questions or send us information about a case by filling out the form below. There is no charge for contacting us with your inquiry. An attorney will review your submission and reply back to you.
THANK YOU
Your information was successfully submitted and we will respond shortly. If you have more information to provide or would like assistance, please contact us directly at 713-650-1010 or info@jag-lawfirm.com